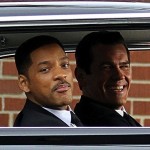 or better known as MIB3 is an upcoming 3D science fiction comedy film starring Will Smith and Tommy Lee Jones. It will be released as the sequel to Men in Black II on May 25, 2012, ten years after its predecessor, and will also star Josh Brolin and Jemaine Clement, with Barry Sonnenfeld returning as director, and Steven Spielberg returning as executive producer.

The Star in “Labor Day” belong to Kate Winslet