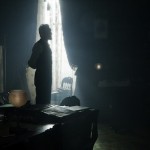 As the Civil War nears its end, President Abraham Lincoln clashes with members of his cabinet over the issue of abolishing slavery.