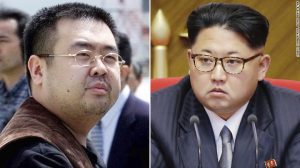 In a brief statement, Khalid Abu Bakar, the national police chief, said the substance was listed as a chemical weapon under the Chemical Weapons Conventions of 1997 and 2005.

Samples were taken from Mr. Kim’s skin and eye. The poison was identified in a preliminary analysis by the Center for Chemical Weapons Analysis of the Chemistry Department of Malaysia, Mr. Khalid said.

The statement gave the chemical name as Ethyl S-2-diisopropylaminoethyl methylphosphonothiolate.

The police chief’s announcement came just a day after North Korea denied any responsibility for Mr. Kim’s death, accusing the Malaysian authorities of fabricating evidence of Pyongyang’s involvement under the influence of the North’s archrival, South Korea.

According to Wikipedia:
The VX nerve agent is the best-known of the V-series of nerve agents and is considered an area denial weapon due to its physical properties. It is far more powerful than sarin, another well known nerve agent toxin, but works in a similar way.