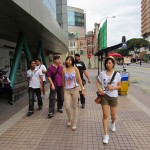 Last saturday (5th May 2012) we decided to join the first ever #instaKL event, mind you it required us to wake up at the ungodly hour of 5 a.m before we proceeded to meet the rest of the gang
at KL Sentral at 6 a.m.

I must say i was not disappointed!, me being a guy from Ipoh i had rarely ever seen the city of Kuala Lumpur up close and personal, and so when the chance arrived to meetup with a group of
people to walk around KL, take pictures and upload them to Instagram i took it!

The man behind #instaKL is Hakim Albasrawy, according to him:

Sometime during the last webcamp I got this notion in my head that I’d like to walk around Kuala Lumpur snapping pictures and exploring the parts of KL that I usually just drive by and dont give a second look. So I asked around and it looks like I managed to get 15 people to sign up and walk-around with me, armed with their mobile devices we shall explore, snap and document our exploration.

The group (all 11 of us) left KL Sentral before 7 a.m to Masjid Jamek via monorail, we than proceeded to walk around the area including the currently famous spot – Dataran Merdeka, we continued walking as a group although there were moments when some would slip momentarily to take some really cool pictures in secluded spots, by 8.30 a.m after walking about we reached Jalan Dang Wangi and had our breakfast, in fact someone remarked that it should have been called = instaKL – “Road to breakfast”.

Hakim has confirmed that they will be another #instaKL soon, we will keep you updated, join us on facebook to stay connected and we will
inform you of upcoming events.

Some pictures of the event (credit to all respective authors):