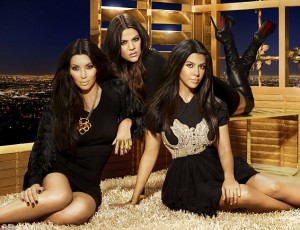 One person who is less than impressed by the Kardashian family’s careers is Daniel Craig, who launched an astonishing foul-mouthed rant at the brood, headed by Kim Kardashian, in a new interview with GQ magazine.
The James Bond star labelled the clan ‘f***ing idiots’ and criticised those who ‘sell’ themselves and then make demands about their private lives.

Craig, who managed to keep his marriage to Rachel Weisz under wraps in the summer, told the January edition of GQ magazine: ‘I think there’s a lot to be said for keeping your own counsel.
‘It’s not about being afraid to be public with your emotions or about who you are and what you stand for. But if you sell it off it’s gone.
‘You can’t buy it back – you can’t buy your privacy back. Ooh I want to be alone. F*** you. We’ve been in your living room. We were at your birth. You filmed it for us and showed us the placenta and now you want some privacy?