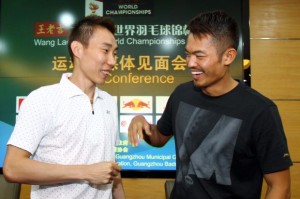 The unthinkable is about to happen, World No. 1 singles shuttler Lee Chong Wei and Lin Dan of China, will team up in the men’s doubles event in the name of sports promotion.

On Monday, Chong Wei said that he was looking forward to the prospect of playing alongside Lin Dan in an exhibition match on Feb 16 in Lingshui, China, in conjunction with the opening of a new national training centre in the province.

And to make it even more mouth-watering, the duo will take on five-time world champions Cai Yun-Fu Haifeng of China.

It is the first time that Lin Dan will be making his appearance in front of his fans after having beaten Chong Wei in the final of the World Championships in Guangzhou last August.

“I received an invitation from China’s chief coach Li Yongbo to take part in this exhibition match. I was surprised that he wanted me to play with Lin Dan in the doubles …. I have not played doubles before but this is a good idea to promote the game and will be good for the sport,” said the 31-year-old Chong Wei.