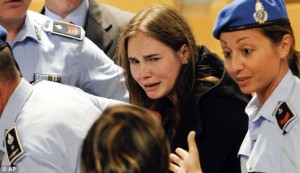 Amanda Knox was on her way back to the U.S. this evening after an appeal court sensationally cleared her of murdering Meredith Kercher.
Staring ahead towards a lucrative future of million-dollar TV and book deals, Knox was spotted being driven away from Capanne Prison outside Perugia, four years after she was convicted of murder.
Earlier her family had whooped and hugged in court as an Italian judge told her the prosecution had failed to prove she and her boyfriend killed the 21-year-old British student.