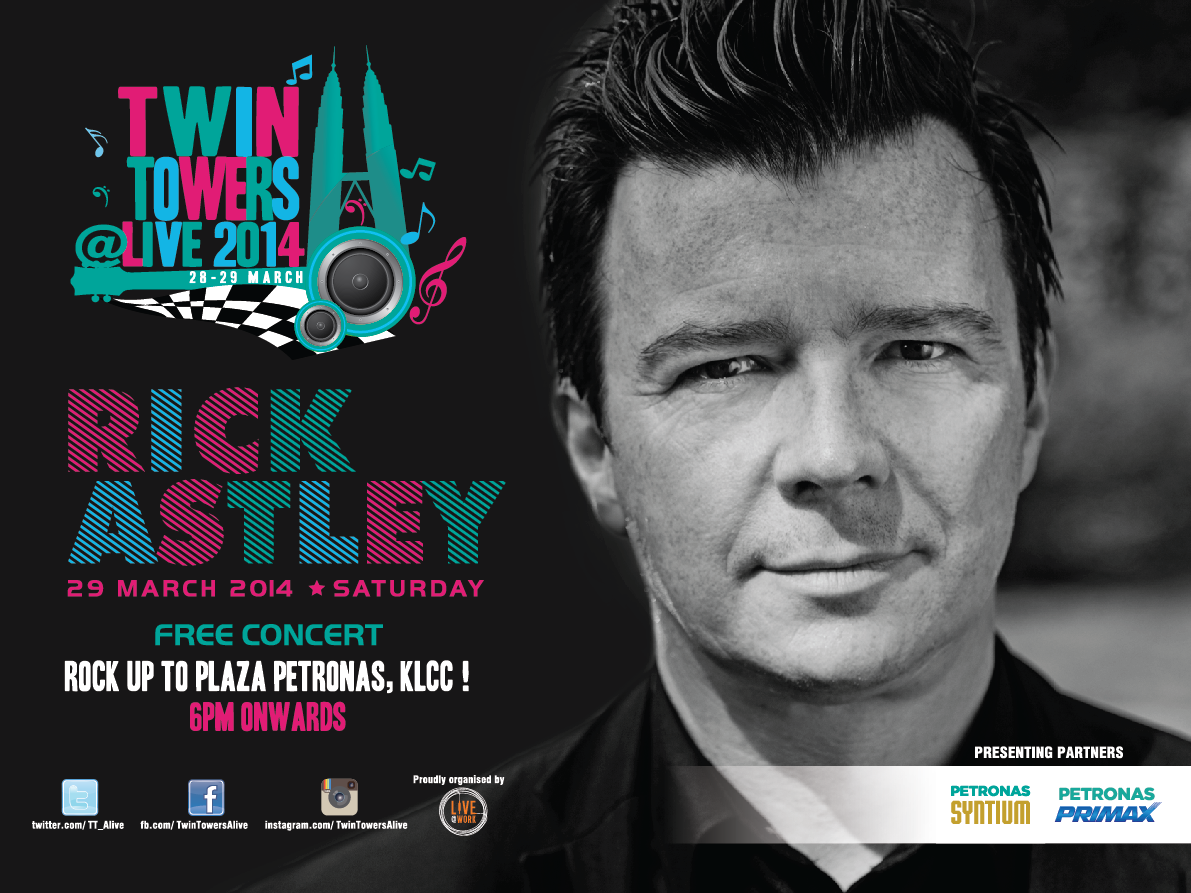 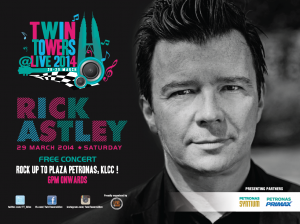 Exploding on to the music scene in 1987, Rick Astley’s took the music industry
by storm in an era of pop disco music. Following the release of his debut single

“Never Gonna Give You Up”, the 21 year old became a sensation
overnight. Within 2 weeks of its release, the single reached Number 1 in the UK
for 5 weeks and went on to hit Number 1 in 16 other countries
worldwide. Today, he still holds the record of being the only male solo artist
to have his first 8 singles reach the Top Ten in the UK.

His second single “Whenever You Need Somebody” hit Number 1 in 7
countries, and his debut album of the same name, released in 1988, including 4
self-penned songs, went on to sell over 15.2 million copies worldwide, making
him the top selling British act of the year. The album was a huge success in the
U.S., entering the Top Ten in the album charts and earning him a Grammy
nomination as ‘Best New Artist’.

Let’s Rev & Rock Plaza PETRONAS and be entertained by this much-loved
performer on 29th March at the Twin Towers @Live 2014.

PETRONAS Syntium and PETRONAS PRIMAX are the Presenting Partners of
Twin Towers @Live 2014. For the first time, SapuraKencana Petroleum will be
collaborating as the Main Sponsor and supported by Dialog Group Bhd as the
Support Sponsor.

Shangri-La Hotel Kuala Lumpur, the Official Hotel of the concert will be hosting
all the international stars throughout their stay in Kuala Lumpur. All the stars will
also be transported by Mercedes-Benz cars, the Official Car Partner. Pernod
Ricard Malaysia and Carlsberg Marketing are the Official Beverage Partners.

“Astro Awani, being the Official Broadcast Partner, will be promoting and
broadcasting this highly anticipated event of the year on Astro Channel 501 and
Astro AWANI’s digital platforms. Log on to astroawani.com or download Astro
AWANI’s FREE app from the App Store or Google Play for the latest updates”.

Tune-in the Official Radio Stations, MIX fm, Lite FM, ERA FM and MY FM for
great selections of airplays of the artists performing at the Twin Towers @Live
2014. For the latest and fast updates, visit MSN Online, the Official Online
Partner.