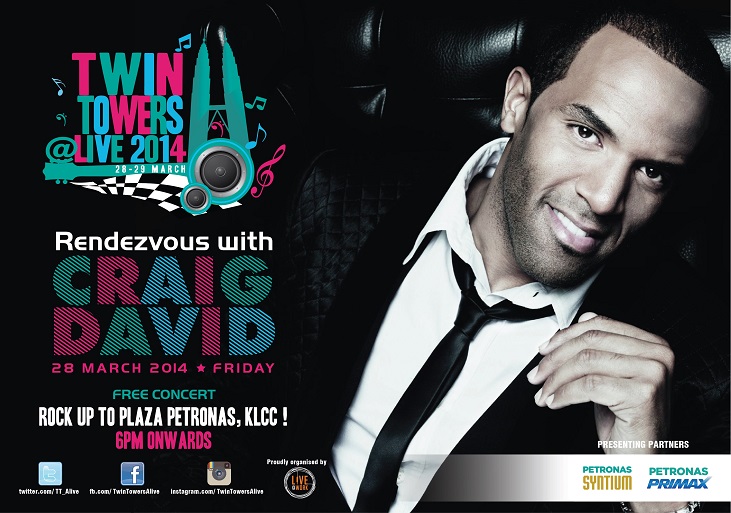 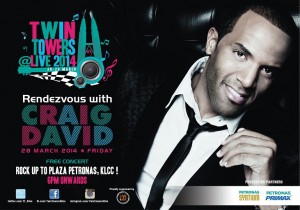 Craig David will set Malaysian hearts racing come 28 March 2014 as the British heartthrob from United Kingdom will make an appearance at the Twin Towers @live 2014.

Craig David is the second artist announced after the K-Pop sensation, Rain. They will be joined by a slew of high-profile artists to be announced on a later date. One thing is for sure, this is one party you would not want to miss.

Craig David rose to fame with “Re-Rewind” as a member of UK Garage group Artful Dodger. The track’s success led to David striking out on his own, his debut single “Fill Me In” making him the youngest male solo singer to reach number one in the UK. This was the first of four Top 10 hits from his seminal work, “Born To Do It”, which came second only to Michael Jackson’s “Thriller” in MTV’s Greatest Album of All-Time poll on both sides of the Atlantic.

Since then, David has continued to break the mould of contemporary R&B by
boldly experimenting with different genres. This resulted in a unique sound
that sold 13 million albums, picked up multiple award songs, promoted fullhouse
shows worldwide and spawned countless imitators.

In 2012, Craig continued to collaborate with a number of artists, and released
tracks with internationally acclaimed DJ Erick Morillo and Italian superstars
Stereo Palma. Craig has also more recently returned to his childhood love of
DJ-ing to present TS5.

When he is not busy juggling star-studded collaborations as well as weekly DJ
sets on national radio and renowned nightclub Capital, David is finetuning his
next album, “Following My Intuition”. Lucky fans were given a glimpse of the
new material during his most recent tour, and David’s local fans should expect
the same when he swings by Kuala Lumpur.