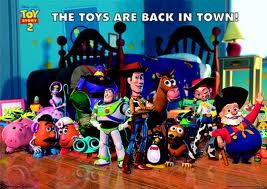 Los Angeles: They are back! The very famous cartoon “Toy Story” Woody the cowboy, Buzz Lightyear and their pals are back on the big screen in a new adventure.

The voices of Tom Hanks, Tim Allen, Michael Keaton, Joan Cusack and the other stars are featured in a “Toy Story” short film that runs before the Pixar Animation sequel “Cars 2”, which already debuts in US theaters Friday.

“Toy Story: Hawaiian Vacation” has Hanks’ Woody, Allen’s Buzz, Cusack’s Jessie the cowgirl and the others toy coming up with a scheme to give doll sweethearts Ken and Barbie (Keaton and Jodi Benson) the trip of their dreams.

After lending his voice to the franchise’s three blockbuster feature length films, Hanks says he’ll keep coming back to do the voice of Woody whenever Disney-owned Pixar wants to do more with the toy story character.

“Are those people some brand of genius that you can’t really begin to fathom?” said Hanks of Pixar, whose 11 feature-length animated films have been critical and commercial successes.

“As long as I don’t develop a smoker’s cough, yeah, I’m there.

Whenever they need because there’s only one Woody and it’s me.

With winning six of the 10 Acedemy Award for feature length animation since the category was added, Pixar has earned 10 Oscar nominations for its short films and win three.

Some of those short cartoons have preceded by the othe Pixar feature films on the big-screen, reviving a sense of the serial entertainment that Hollywood provided at cinemas in early years.

“We really believe in the short film,” said the Pixar’s creative mastermind, John Lasseter, that received a special Oscar for 1995’s “Toy Story,” for the first computer animated feature film.

“First, in the case of these, it just kind of keeps new animation of our favourite characters going.”

“Second, for us internally, its great way for us let the young celebrities take the next step up in their career to try directing.”

Gary Rydstrom directs the new short of the “Toy Story”, a seven time the Oscar winner for sound or sound effects editing on such movies as “Titanic”, “Jurassic Park”, and “Saving Private Ryan.”

Lasseter, who also directed “Toy Story 2”, “A bug’s life”, “Cars” and “Cars 2,” said short cartoons allow him and the Pixar crew to keep in touch with characters they have come to consider friends.

Pixar already has crafted short film for television and home video reprising characters from “Cars,” “The Incredibles,” “Up” and other feature hits.

“We’ll come up with the great ideas, little gags and stuff that are really fun, and that are not necessarily appropriate story-wise for a feature film,” said Lasseter.

“But they’re really fantastic for a short film where you would love to see the characters again.” – The Star

Tangled Ever After – (The Rings Scene) – Video