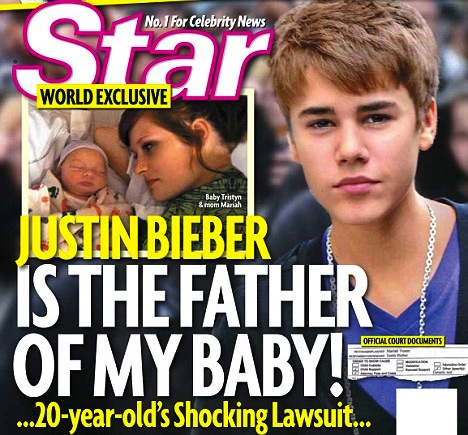 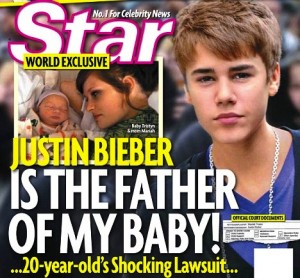 Mariah Yeater, 20, is pictured on the cover of U.S. magazine Star with her son, Tristyn Anthony Markhouse Yeater, who was born on July 6.
In news which has stunned the world, the 17-year-old superstar has been named in a paternity lawsuit which she filed on October 31.
Yeater has asked the star to submit to a paternity test, and is asking Bieber ‘to provide adequate support for my baby’, the result of a tryst she alleged lasted no longer than 30 seconds.

In a legal statement, sworn under penalty of perjury, Yeater told a California court that Bieber propositioned her on October 25 of last year, when she was 19 after his concert and at L.A.’s Staples Center.

According to U.S. website Radar Online, Yeater told a judge: ‘When I later realized I was pregnant with Justin Bieber’s baby, I tried to contact him through his representatives but no one ever called me back.’
She stated: ‘On July 6, 2011, I gave birth to a baby boy. That was exactly 36 weeks and two days after the sexual encounter with Justin Bieber.