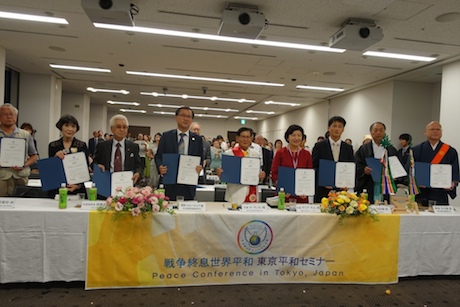 After being awarded as the “Peace Advocate of World Peace” in China, Mr. Lee visits Japan during his 14th world tour to Northeast Asia


On the 70th Anniversary of the end of World War II, South Korean peace advocate and Chairman of Heavenly Culture World Peace Restoration of Light (HWPL) Mr. Man Hee Lee made a 3-day visit to Japan, following his visit to China. Amongst the topics of discussion during his meetings with Chinese and Japanese leaders were the recent territorial disputes within Asia and the denuclearization of the Korean peninsula. While in China, Mr. Lee was awarded the ‘Peace Advocate of World Peace’ award from the Vice President of the National Committee of the Chinese People’s Political Consultative Conference (CPPCC), Zhang Meiying.

Addressing women’s groups, youth groups, cultural and religious leaders in Japan, Chairman Lee spoke on the theme of The Source to Achieve World Peace. “If each nation’s heads and leaders desire for world peace and love their people, they should sign the cessation of war into international law and sign the peace agreement, affirming that they will cooperate to achieve peace” said Chairman Lee. Following the speech, the peace agreement was unanimously signed by attending leaders.

Nearly the end of the meetings with leaders, Pema Gyalpo, the professor of law in Toin University of Yokohama, who is also known as the founder of GIFT (Global Issues Forum) rushed to meet Mr. Man Hee Lee after his trip from India. He showed respect to Mr. Lee for his diligent work for peace and shared many common grounds with him as a veteran himself. After their conversation, the professor suggested to act as advisor for the international law that the Chairman is pursuing. He also decided to sign the peace agreement and agreed to participate ‘World Alliance of Religions: Peace Summit 2014’ hosted by HWPL on this coming September.

Furthermore, Chairman Lee also met with the International Buddhist Congregation (IBC) in Japan. Among the topics addressed during their meeting was the critical role of religion. He also spoke on the importance of the peace agreement as a commitment to continue mutual cooperation for peace, “Practical evidence is necessary such as the peace agreement of Mindanao Island” said Chairman Lee. Afterwards, the Chairwoman of the International Women’s Peace Group (IWPG) Nam Hee Kim emphasized the need for international cooperation through cultural events and meetings. She addressed young women leaders, calling them to actively work for peace.

Last January, Mr. Lee mediated a peace agreement in the war-torn region of Mindanao, Philippines, where regional religious tension between Catholics and Muslims has led to over 10,000 casualties. Working with the citizens of the Philippine city Zamboanga, Chairman Lee organized a Peace Walk that gathered over 12,000 participants—a bold proclamation that world peace is possible.
Mr. Lee is now currently on his 14th world tour, having visited 54 countries. Media stations like Korea Today, Asia News Agency and Dongyang Economic News documented and broadcasted the news of Mr. Lee’s Northeast Asia visit.