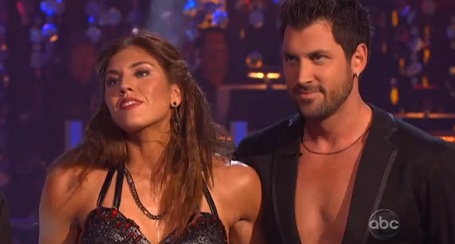 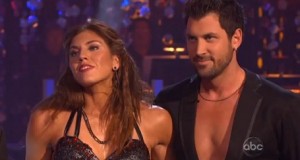 This week on ABC‘s Dancing With The Stars, fans watched as Hope Solo and Maksim Chmerkovskiy were eliminated. After the elimination, most of us assumed that after the way the couple acted all season, that Hope Solo decided to snub the press, as she did not have any interviews. Finally, the soccer star has showed up again on Twitter, claiming it was not her decision to not participate in any post elimination interviews. Who was responsible for it?

Hope Solo broke down after her elimination from Dancing With The Stars this week, and when the regular post elimination press interviews came around and Hope was no where to be found, most of us assumed that Hope Solo was just a sore loser. Hope Solo recently took to her Twitter page to clear the air as she posted: “I’m sitting at the airport happy as can be. I would have have loved to have been on kimmel or gma to officially thank all the wonderful people I met,” adding “I’m sorry everybody! @maksimC and I would never want to cheat our fans! We love you guys! It wasn’t our decision,” after one fan questioned why they did not appear.

Did Google Make the Worst Decision in it’s History?