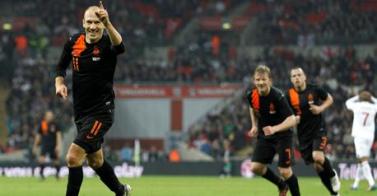 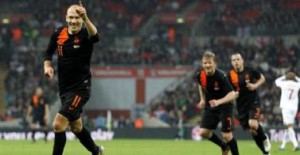 England (AP) -Plagued by injuries since the 2010 World Cup, Arjen Robben provided a timely reminder of his enduring quality by scoring a pair of classy goals in the Netherlands’ 3-2 friendly win over England on Wednesday, 100 days before Euro 2012.

By opening and closing the scoring in at Wembley Stadium, the brilliant but fragile winger helped end a three-match winless run for the Dutch. It was just his second international appearance since the 2010 World Cup final.

After a cagey first half, Robben broke the deadlock in the 57th minute. The Bayern Munich player picked up possession inside his own half, sprinted to the other end of the pitch through a hesitant English defense and blasted the ball past goalkeeper Joe Hart.
Klaas-Jan Huntelaar doubled the Dutch lead with a powerful header within two minutes, but England staged a late comeback under interim coach Stuart Pearce, with Gary Cahill and Ashley Young scoring twice in the last five minutes.
However in stoppage time, England’s defense allowed Mark van Bommel to get hold of the ball and pick out Robben, leaving the former Chelsea and Real Madrid star to send a deflected shot into the net.