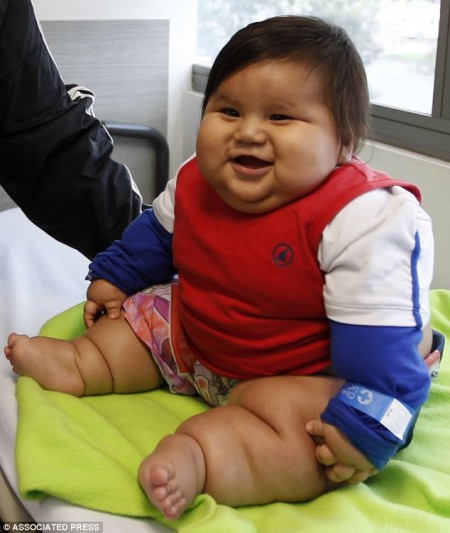 Santiago Mendoza dubbed Colombia’s “most obese baby” and who already weighs the same as a six-year-old child – has been ‘rescued’ by a charity so he can undergo life-saving treatment.

Volunteers from Medellin-based Chubby Hearts foundation (Gorditos de Corazon) stepped in to transport the boy after his mother Eunice Fandiño wrote in asking for help.

‘He was born with an anxiety, so if he cried I just fed him,’ she added.

Medics will try to bring his weight down to a manageable level before submitting him to a series of operations.

‘Likely, what he will need is a long-term treatment, education, healthy food, and when he is older physical activity,’ surgeon Cesar Ernesto Guevar told El Espectador.

‘Otherwise, in the future, he could suffer from diabetes, high blood pressure and severe problems with his joints,’ he added.

Fandiño revealed that she was practically confined to her home as the baby was ‘too heavy’ to take out and about.

But she added that she was ‘optimistic’ about the help she was receiving and has promised to follow the instructions she’s given by doctors.