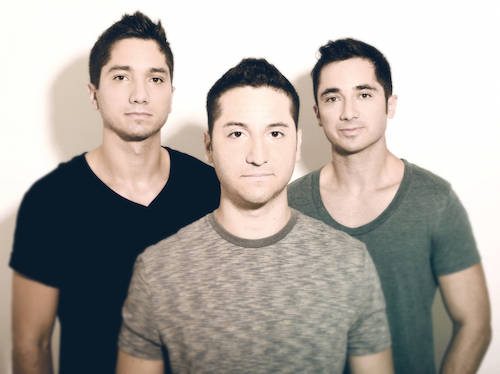 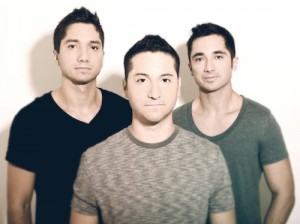 KUALA LUMPUR: Boyce Avenue will be heading to Malaysia as part of their Asia Tour which will be held at KL LIVE on February 12. Organized by The Livescape Group, the one-night-only show is set to attract over 2,000 fans in what will be their first ever appearance in the country.
The band is made up of brothers, Alejandro who sings lead vocals, plays the guitar and piano, Fabian who plays the guitar and sings backing vocals, and Daniel who plays bass, percussion and also sings backing vocals. The brothers formed the band in 2004 and have been producing videos and sharing their original music as well as covers of popular songs on YouTube since 2007.

The band boasts over 6.5 million YouTube subscribers, 1 billion total views, and over 290 videos on their main YouTube channel BoyceAvenue. They have also collaborated with other YouTube artistes such as David Choi, Kina Grannis, Alex Goot, Hannah Trigwell, Tyler Ward, Fifth Harmony, and many more.

The name of the band, Boyce Avenue, is derived from two street names which the brothers used to live on when they were younger. The sensational trio are among the first few internet celebrities to create music-focused channels on YouTube and have since gained a large number of subscribers on their respective YouTube channels. They are known for their collaboration in making covers of popular pop songs on YouTube.

The band’s debut album, All We Have Left includes singles such as “Every Breath”, On My Way” and “Broken Angel”. Boyce Avenue will independently re-release their album All We Have Left through their label, 3 Peace Records, founded in 2006 by the brothers. The band later released their first EP, No Limits, in 2014 which include singles such as “Speed Limit”, “I Had To Try” and “Scars”.

The Boyce Avenue Asia Tour live in Kuala Lumpur will take place at KL LIVE, Kuala Lumpur on February 12 and will also feature Narmi and Elizabeth Tan as opening acts with JinnyBoy hosting. Limited early bird tickets will be sold at an exclusive price of RM158 via Groupon. The rest of the tickets to the show are priced at RM188 for General tickets, and RM288 for VIP tickets and will be available for sale via http://www.ticketpro.com.my. Tickets go on sale on January 8 onwards. Doors to the show on February 12 opens at 7.30PM 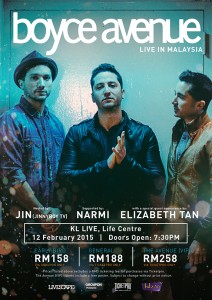