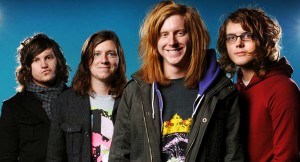 The deeds are out — American pop-punk band We the Kings is confirmed making their way to Malaysia this May! With a special band featuring We Are the In Crowd , also hailing from United States.

We the Kings is famous for the song ‘Check Yes Juliet’ & ‘Secret Valentine’, which they have captivated so many fans around the world with 11 millions hits on Youtube and 55 millions plays on Myspace alone.

The former members consist of Travis, Hunter, Danny, Andrew, Coley O’ , which they all met in highschool. They said that they named their band after their school’s mascot.  They started to play together while they were still in school and promoting their music on social-site , which is a successful discovery and the group signed to S-Curve Records.

Not only that, they have toured to a few numbers of music festivals , rock shows with bands such as Metro Station, All Time Low, Boys Like Girls , Mayday Parade, New Boyz, Forever Sickest Kids & many more.

For the first time ever in Malaysia, We the Kings are coming down to perform for their crazy fans & not only just them — We Are the In Crowd will also be sharing the same stage to give Malaysia a show that is nothing like before.