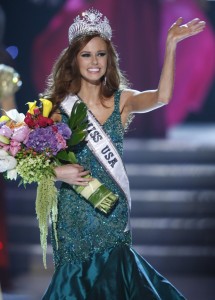 The just concluded pageant, three areas was been focus for the competitions such as swimsuits, evening gowns and interview questions.

A day before the glorious night, Campanella (Miss California) secure her way to the semi-finals stage, she passed through the interviewed stage. This earned her to the final stage of the pageant beating up 51 contestant because of the support of the teaching of evolution.

She was also asked about her opinion on legalizing of Marijuana and was her response.
“I was taught evolution in high school. I do believe in it. I’m a huge science geek, I like to believe in the Big Bang theory and, you know, the evolution of humans throughout time”

Her opinion on legalizing marijuana, and she replied.
“Well, I understand why that question would be asked, especially with today’s economy, but I also understand that medical marijuana is very important to help those who need it medically,”

“I’m not sure if it should be legalized, if it would really affect, with the drug war. I mean, it’s abused today, unfortunately, so that’s the only reason why I would kind of be a little bit against it, but medically it’s OK.”
Miss California gain her crown with this final stage of interview and she would represent USA in this year Miss Universe Pageant in Sao Paulo, Brazil on September,2011 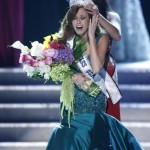 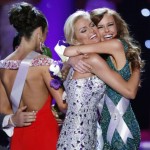 MIss USA With Other Contestants