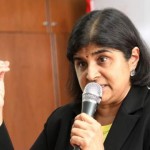 Senior lawyer and co-chair of polls watchdog Bersih,Datuk Ambiga Sreenevasan says that it is an offense to provide flights for voters.

“It’s an offence under 20(6)(b),” Ambiga told The Malaysian Insider late last night, referring to the Election Offences Act 1954.

The prominent lawyer pointed out that under that section, voters may be ferried to their polling stations across the sea, but that such transportation must be provided to all voters.

She noted, however, that since such flights were provided by “friends” of BN, it was likely that the flights were only for those voting for the coalition.

“You’ve got to give it to everybody. That’s the test. You can’t be selective,” said Ambiga.