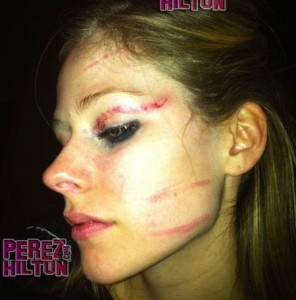 Avril Lavigne says she’s a bloody mess after being jumped by 5 people last night — explaining, “My face is f**ked.”

Brody Jenner reportedly intervened when Avril Lavigne was attacked.
Earlier this year, Gavin DeGraw was beaten by a group of guys who reportedly rearranged his face. Now something similar has happened to Avril Lavigne.

TMZ.com reported that the singer was involved in a fight outside the Hollywood Roosevelt Hotel at around 1 a.m. Sunday morning, and her boyfriend, Brody Jenner, was hit in the head with a bottle while trying to break it up. Today, Lavinge confirmed the altercation via Twitter, writing, “I don’t fight. I don’t believe in it. To clear things up I got attacked by 5 people last night out of nowhere. Not cool. My face is f**ked. As in black eye, bloody nose, hair ripped out, scratches, bruises and cuts. So not ok to be abusive to others. Violence is NEVER the answer.”

Russell Peters Coming to Malaysia in May 2012