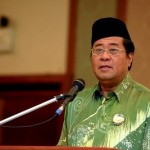 The members, from the Kuala Selangor division, lodged the report over irregularities revealed in the division’s financial statement at its 2010 annual meeting.

Party member Airos Shahidin Manap, 45, said there was a suspicion of an abuse of power and falsification of the statements.

“We had given him six months to explain the issue but we have not yet received any explanation or answer.

“As members, we feel we have the right to point out his shortcomings and correct the issue,” he said.