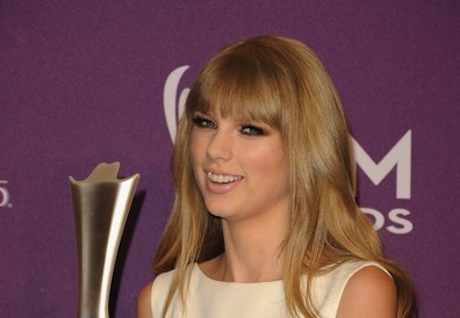 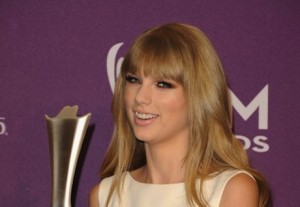 Taylor Swift won her second consecutive entertainer of the year award at the Academy of Country Music Awards on Sunday night, just 24 hours after she was saluted by first lady Michelle Obama for her charity work on The Kids’ Choice Awards.
Even by Swift’s lofty standards, it was an outstanding weekend — though tempered with a little melancholy.
After hugging her way to the stage, she took a moment to say hello to Kevin McGuire and his family. McGuire, a high school football player and Swift fan who has cancer, was to have been Swift’s date to the awards, but he was hospitalized and couldn’t make it.
“He’s not here but I promised him I would give him a shoutout,” Swift said of the Somerdale, N.J., resident.
The 22-year-old Swift becomes just the second woman to win the award twice after Carrie Underwood accomplished that feat before Swift. She beat out an all-male field that included Kenny Chesney, who was shut out at the awards after leading all nominees nine. Miranda Lambert, Jason Aldean and Kelly Clarkson were the night’s top winners with two awards apiece.

Woman of The Year