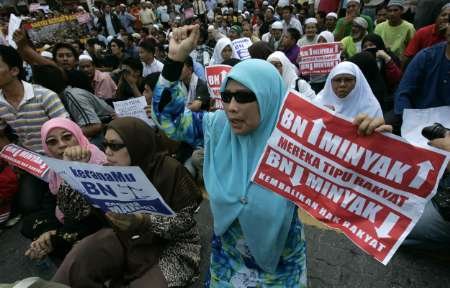 Kuala Lumpur climbs up another twelve spots in the Economist Intelligence Unit’s (EIU) ranking of the world’s most expensive cities, reaching 74th in February from 86th in June last year.

Stubbornly high inflation and stagnant wages pose a potential challenge for the Najib administration as the general election grows nearer.
Analysts have said that the cost of living will be one of the biggest issues in the next election.

In the run-up to the 2008 polls, a spike in fuel prices and toll rates had contributed to a backfire against the Abdullah administration and helped earn the ruling Barisan Nasional (BN) coalition the informal moniker of “Barang Naik” (Malay for “Price Increase”).

The Najib administration faces a difficult dilemma as it has pledged financial reforms such as subsidy cuts to help reduce the budget deficit and eliminate market distortions, but aggressive reductions in subsidy could further increase the cost of living.

It is an offence to provide flights for voters – Ambiga