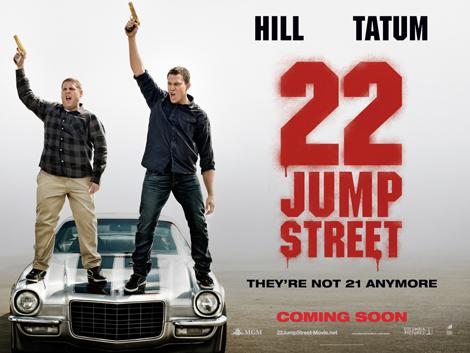 22 Jump Street is a 2014 American action comedy film produced by and starring Jonah Hill and Channing Tatum, scripted by Michael Bacall and Oren Uziel, from a story by Hill and Bacall, and directed by Phil Lord and Christopher Miller. It is the sequel to the 2012 film 21 Jump Street, based on the 1987 television series of the same name byStephen J. Cannell and Patrick Hasburgh. The film was released on June 13, 2014, by Columbia Pictures and Metro-Goldwyn-Mayer.

After making their way through high school (twice), big changes are in store for officers Schmidt (Jonah Hill) and Jenko (Channing Tatum) when they go deep undercover at a local college. But when Jenko meets a kindred spirit on the football team, and Schmidt infiltrates the bohemian art major scene, they begin to question their partnership. Now they don’t have to just crack the case – they have to figure out if they can have a mature relationship. If these two overgrown adolescents can grow from freshmen into real men, college might be the best thing that ever happened to them.